At the Corps rings the sound of hope 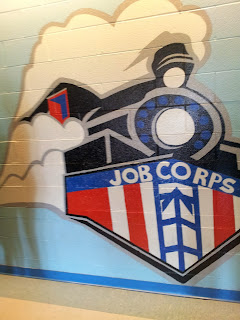 By Brandon Ousley
Inside the dim-lit corridors of the educational building of the Paul Simon Chicago Job Corps Center, silence floats amid the hard slam of doors. It’s 8 a.m. The gigantic front door swings open with students rushing to their classes. The patter of feet, laughter, chatter, and even hip-hop rhythms from cell phones permeate the large hallways, shunning out the still silence that existed moments earlier. It’s a scene that resembles the cluttered hallways of some public high schools.
“All right, let’s get to class, ladies and gents!” Brigitte Saffold shouts in her typical commanding voice, over the escalating voices and giggles that fill the entire hall. Saffold has been the administrative assistant for the deputy director of the center.


Saffold walks toward a crowd of students, standing around tightly-arranged classroom doors. She grasps a radio transceiver in her hand, with codes and instructions randomly blaring from its speaker. She greets, graces a smile, and puts on a serious look effortlessly—all at once.
“Hey Miss Brigitte! How was your weekend?” a student asks, while hastily gliding into the math classroom.
“It was good. Have a productive day, ladies,” Saffold replies. “I need those guys in the back to get to class immediately. I don’t want to snap, crackle, and pop.”
It’s a typical day in the educational building of Paul Simon Chicago Job Corps, where students strive to push through poverty, homelessness, pregnancy, and parental problems. For Saffold, survival is the key for both students and the administration. 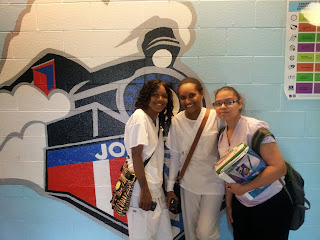 “When I come to work every day, I’m 100 percent committed to the students,” says Saffold, 55, who has worked at the center for five years. “Just seeing the students meeting their goals is an important part of the commitment of this center. A lot of the students call me ‘Momma Brigitte’ or ‘Auntie Brigitte,’ as many of them haven’t had many people in their corner before and this represents a second chance for them.”
Paul Simon Chicago Job Corps Center sits in the heart of the horn-honking, car congested, urban sprawl of 3348 S. Kedzie Ave., on a campus extending over 33 acres. It features nine facilities specialized in academic and career training for at-risk youth, ages 16 to 24. Job Corps is administered by the United States Department of Labor and operated by Management & Training Corporation, based in Centerville, Utah.
According to Bryan Mason, director of the Paul Simon Chicago Job Corps Center, there are 125 job corps campuses across the U.S. and three campuses in Illinois alone. He says that Paul Simon Chicago Job Corps center on Kedzie serves 100 young people every year. Youth may enroll at any time to obtain GED credit or pursue job-training programs in Chicago.
However, there have been problems for the center’s administration to help convince youth about the program and how it can benefit them in the future. “I would say the biggest thing is promotion of Job Corps,” says Mason, who said that this program is more of a “viable opportunity” for individuals who need help in certain areas.
“We’ve never had difficulty accommodating our students, as well as having several freeze problems. But job corps has primarily operated based on the experience of former job corps students and partnerships that refer youth to the program,” Mason says. “I think the freeze had a dramatic impact on the youth feeling that Job Corps may not be an absolute choice for them, so we are in the process of getting back out there and convincing students that need the help to enroll.” 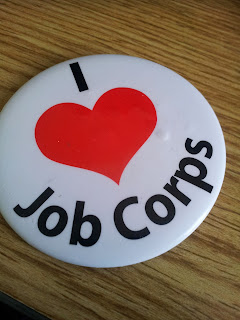 Inside a computer room, in the recreation building of the Job Corps Center. Kenneth Johnson, 21, sat, gazing at the computer screen with earphones streaming from his ear.  Johnson glanced at a few websites, with one of the windows showing a Walgreens application he is filling out, in hoping he would score a job. He typed his information in the application fields and submits the form. He has only enrolled at the center for two years and plans on graduating with his GED sometime this winter. His redemptive story echoes many of the experiences students have endured and constantly fight before and during their tenure at the Job Corps center.
“It has been a long ride for me,” Johnson said, while bobbing his head to the sounds of Drake booming in his ears. “I can say that I dropped out of high school because I was having problems at home, and then, my grandmother got sick at the time. My desire for school wasn’t there.”
When Johnson dropped out of Dunbar High School in 2008, he said he was living in a world of chaos, primarily at home. With his grandmother’s health deteriorating and being the focal influence for his younger brother, Dequan, he said he soon had to make another decision. In 2010, it was suggested by a guidance counselor for him to consider enrolling at Job Corps. For Johnson, it had been just the move he needed.
“Looking back at the decision, it wasn’t even about getting paid by the government,” Johnson says. “Somewhere I needed to experience another side of where I came from, and even though it hasn’t been easy, I learned about how the world works. It’s something that I didn’t get when I was 16 or 17.”
At Job Corps recently, buzzing rang out in the hallway. Johnson gathered his book bag, heading to his engineering class, was to start in five minutes. He zipped his red hoodie while walking outside of the recreation building toward the educational building, where he came across two young men.
“What’s up, my dude?” asked one of the men, walking up to Johnson, greeting him. 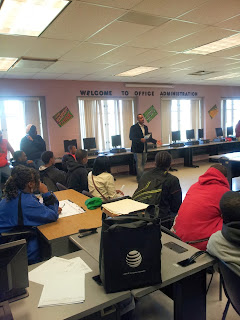 “Nothing bro, I’ll check y’all later. Getting this class thing together,” replied Johnson.
Johnson nodded his head at the two men and continued on his way. Inside the educational building, he rushed to the end of the hallway. The sound of chairs screeching and books slamming leaked out into the hallway. He rushed into the classroom, reaching his engineering class a minute after it had begun. He hung his hoodie on a hook, in the back of the class, and sat down. Silence permeated the classroom, as students gazed at Mr. Riddle, their instructor. Some seemed engaged. Others not so engaged.
Johnson pulled a composition notebook from his book bag and began to write his name. He appeared tired and worn. For Johnson, this is part of his daily routine, part of living one moment at a time to get to the next.
“One thing that Paul Simon Chicago Job Corps has taught me is time management. I'm still getting used to it. I can't say I understood what it was before getting here,” he said.
But at Job Corps, he’s learning.