For Chicago's Bucket Boys, the beat goes on

Story and Video
By Alesia Wright

Just off the Dan Ryan expressway on the South Side, the commotion of car horns and police sirens fills the air. A husky dark-skinned man wearing a black fitted cap with the word “Chicago” stitched in white letters on the front and dark aviator sunglasses over his eyes strides gracefully through the traffic selling cold bottles of water, two for one dollar. “Ice cold,” he yells.
Here at this intersection of 47th and LaSalle Streets, above the squeaking car breaks and the stew of sounds of the Bronzeville neighborhood, the rhythmic resonance of drums that can be heard from at least four blocks away rises above it all, becoming the dominant notes in the air.  And on the east side of the intersection, in the middle of 47th street, sit two young men with their dreads and Vic Firth drumsticks alike, whipping through the air with such zeal and ambition.

With the butts of their sticks continuously thumping out a lively and fervent cadence on the instruments between their knees that resemble the sound of a snare drum, they put on a minute long show for commuters in their cars awaiting the traffic light to change. But their percussion-type instruments are not snares, but five-gallon buckets turned upside down. They conclude the cadence with their buckets outreached, “Wanna help us out?” they ask. 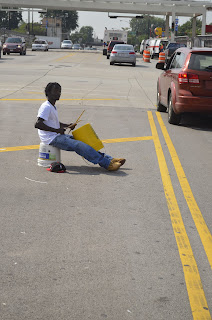 Using their sticks and buckets to drum up donations, these are the Bucket Boys. The group, dubbed the Chicago Bucket Boys, goes back as far as the mid 1990’s, according to Chad Marshall, 35, a former Bucket Boy. It all started with a group of South Side boys from the Robert Taylor Homes, a public housing project along South State Street that has since been demolished.  Those boys, according to Marshall, used their five-gallon buckets and drumsticks, and their raw talent of “beating,” as they call it as a pastime.
“That’s what we did to stay out of trouble, and to get the girls,” Marshall chuckles.
Although the original group, he says, is no longer around, the tradition has since then trickled down to a new generation of brothers, sons, and cousins.
There seem to be dozens of groups of Bucket Boys that can be found all over Chicago. Although they are not affiliated with each other, they all seem to have an unsaid tie that links them together, their tough inner-city upbringing.
“It was a lot of frustration and bull that came with growing up in the projects,” Marshall says. "We dealt with more deaths, drugs, and whatever else as 15-year-old kids than some adults can say they’ve even seen in a lifetime. It was a warzone.”
A majority, if not all of these young men, live in, in what society would call, the “slums” or the “hoods” of Chicago. But contrary to what some might think, not all of these young men are hoodlums or thugs.
DaMonte Williams, 20, has been beating for five years, and sees beating a better alternative for him rather than going to jail, like many of his relatives.
“I know I messed up my school and stuff so it’s hard for me to get a job that’s why I’m getting my G.E.D. It’s been what’s keeping me from getting locked up because I got a lot of people in my family that’s been lock up." 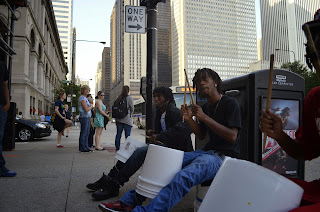 Willams says various family members have been through the Cook County Jail system, including his 26-year-old uncle, who Williams says has spent a majority of his life in and out of prison and his younger cousin.
“My little cousin, he’s 19. He use to do this," Williams says, referring to beating buckets. "He had just got out. He was locked up for three years. Looking at all that, I’m like there’s no reason to risk it.”
Williams says his original inspiration to play the buckets came from his cousin, Devon Jackson. Jackson says he wanted to start playing eight years ago the buckets because of his older brother.
“My brother and them used to do it all the time. They used to come back with a lot of money,” Jackson says.
When he first started he was young, so he didn’t do it for the money, but the fun instead. But the older he became, the more he started seeing the money flow in from the beating. That’s when, Jackson says, he started drumming more and more.
With the help of Elilita Tewelde, who worked for the Chicago Urban League at the time, the group of Bucket Boys that Williams beats with gained an opportunity to go to the country of Senegal, West Africa.
Upon approaching the group of Bucket Boys on 47th and LaSalle one brisk spring day, beating on their buckets in March 2010, Tewelde gave the group a proposition according to, Williams. She was interested in taking the group to a West African drum workshop.
Tewelde explains on a website made to help the group fundraise for the trip, how she wanted the group to see the link between their drumming and their African heritage. After two years of fundraising, the group finally met their goal of $20,000 and set out to West Africa.
Williams recalled how the group stayed at a beachfront hotel that overlooked the crystal blue water as well as the villages they visited in the bush.
For many of the Chicago Bucket Boys, traditional African drumming and music is something foreign to them. And yet, they have more in common to African culture than some of them may think.
Groups called Asafo bands in the Gold Coast that traveled throughout Africa served as guides and were made up of young boys from various communities, Robert Hanserd, a lecturer of African, Atlantic, and African American history at Columbia College explains: "They went around to carry information to various places, they acted as police force to protect traders as they moved around throughout the Gold Coast." 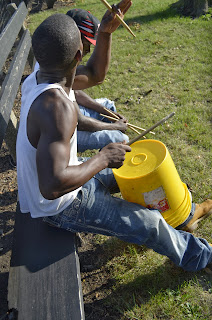 Although the roles of the Bucket Boys and various musical groups in Africa differ in duties, there are still similarities between the two. “They’re using an everyday ordinary implement like a bucket to make music, and I think that’s sort of parallel to West African cultures where they used ordinary things to make music,” explains Rosita Sands, a professor of music at Columbia College.
Baba Ken Okulolo, the leader of the West African band named The Nigerian Brothers, reminisces on how his village used nothing but their hands, voices, and whatever they could find to put together to make music. And that African influence and kind of cultural music making, is still happening today, even among the Bucket Boys who use their makeshift drums as an expression of their culture.
And they may be found today, miles from the shores of West Africa, on familiar Chicago street corners, beating out uptempo cadences with their wildly flailing drumsticks, echoing throughout Bronzeville, putting on a show for anyone willing to listen.