More to his cooking than clanking and knives 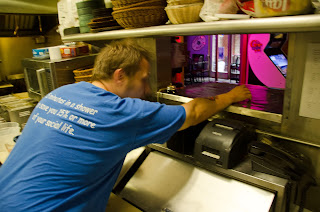 The swinging kitchen doors pass and clatter against each other, allowing brief murmurs to sneak in from The Pumping Company dining room in the Edgewater neighborhood. The kitchen’s order printer screeches out another itemized ticket and Kevin Green rips it from the machine. The paper crumples in his hand and he adds it to the end of a growing line. The lone cook in the kitchen’s feet patter on the rubber mats from one end of the kitchen to the other. Oven doors whine open and slam close, a timer goes off and ceramic plates scrape against one another. The frialator’s oil hisses and pops as Green cautiously navigates around its corner. “This kitchen is too damn small, man,” Green quips.
His hands blur and his knife thuds rhythmically against a plastic cutting board. Utensils clank and Green plates the food before sliding the plates into the pickup window. He slams his hand down on a counter bell, muffling its ring before tearing a new ticket from the order machine.
Kitchen work comes naturally to Green, he said, it’s in his family. Cooking allows him to give a family and a child he claims as his own a life he never had, he says. Born at Edgewater Hospital in Chicago on Sept. 22, 1984, Green entered a large family with a compilation of children from multiple marriages and relationships. The youngest of the children by over 15 years for Douglas and Karen Green, he grew up in the rural town of Genoa, Ill, about 60 miles west of Chicago.
Green was exposed to the life of a restaurateur at a young age. His mother was a chef and baker for miscellaneous restaurants a profession, he said. It was her passion and it was his mother who first taught him how to cook. But rural life was tough for Green, he said. He remembers his parents babied him and he idolized his older brother, Christopher McKraken, who was often out of the house and sometimes in trouble with the law. Mostly drug problems, Green remembers.
As a child growing up in Genoa, Green said he found it difficult to fit in at school. He was overweight, picked on by other kids and into other things that he deemed unusual for his classmates to like. Green found temporary solace in mechanics and tinkering with machines. He found peace by taking things apart and piecing them back together, especially the family’s vacuum cleaner.
“He liked to see how things tick,” McKraken recalled of his brother. As a child Green used to add nails to their tree house indiscriminately in an attempt to improve it, McKraken said.
“Someday someone is going to take a metal detector over there and find a lot of nails,” he jokes.
The older Green got, the more withdrawn from other kids and into his own world he became. In the seventh grade, as trains thundered underneath him, Green recalls he smoked his first joint on a bridge by his home; a habit and coping mechanism he continues today whenever he is frustrated or angry. Green found a lot to be angry with, he said.
On the morning of Dec. 23, 1999, Green slept among mechanical tools and a layer of smoke that hung from the ceiling in his parent’s basement. His television that he never turned off whispered inaudible sounds from the corner. His brother woke him to tragic news. Green’s father died that morning from a heart attack. This changed Green’s entire outlook on life, he said.
“The fact that I felt that he was taken away from me was one of the biggest things, ya know?” Green said. “He should have been there, I felt that somebody had wronged me or done me an injustice.” 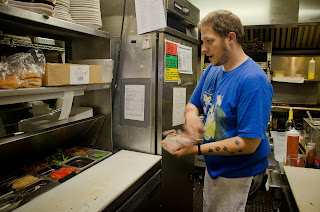 Not long after his high school graduation in 2003, his mother was diagnosed with terminal cancer and unable to work. Green stayed beside her and instead of going to college worked fulltime to pay for her treatments and help with bills. He chose to do what his mother taught him and applied as a cook in restaurants. The fact that his sense of taste differed from his coworkers did not deter him from helping his family, he said.
Green worked at multiple restaurants through the years while he took his mother to therapy and helped pay the bills. In autumn 2006, Green’s mother died.
Along with his brother and niece, Green moved to Chicago into an apartment on the North Side. Green continued to cook professionally, inheriting his mother’s chef knives, and got a job at the Pumping Company bar and restaurant to make ends meet.
____________________
"He kept coming out into the dining
room and making eyes with me."
-Lauren Lyman-Stermer
____________________

One hot July afternoon in 2012, Lauren Lyman-Stermer walked into the Pumping Company during Green’s lunch shift. She was in the midst of preparing to move to Seattle with her 4-year-old son; she needed a change, she said. Green met his firecracker that day; the ying to his yang, he said. “It was a complete accident, it was just happenstance,” Lyman-Stermer said.
Business was slow that afternoon. A few patrons lingered at the bar cracking jokes and snickering to each other. She sat down with a friend and noticed that the dining room was quiet except for the clatter of the swinging kitchen doors. “He kept coming out into the dining room and making eyes with me,” Lyman-Stermer said.
Soon, “making eyes” turned into walks along Lake Michigan and breakfasts in bed. Instead of moving to Seattle, Lyman-Stermer and Green moved in together in the Edgewater neighborhood where they live today. “Kevin took care of my kid,” she said. “He took that role on and fell into it.”
Back in the kitchen at the Pumping Company, Green’s shift is winding down. It is almost midnight and the howl of the order machine has quieted. Green still moves back and forth hurriedly with a wet towel; soapy water splashes on the floor and countertops.
He finishes cleaning and wraps up his mother’s knives in a black cloth bag he slings onto his back. He walks outside and lights a cigarette, he can taste it, barely. It’s another day for the man with no taste buds.
Email ThisBlogThis!Share to TwitterShare to FacebookShare to Pinterest
Newer Post Older Post Home