Story and Video
by Daria Sokolova 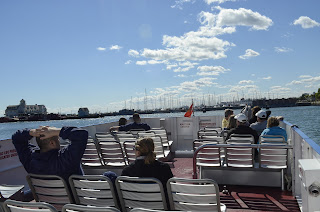 Esteban Ortiz looks at the sinuous ripple the Shoreline Taxi leaves in the water of Lake Michigan. His eyes are fixated on the boat until it blends in with the jagged Chicago skyline. As the boat goes out of sight, Ortiz starts singing his rhymes, trying to boost the dwindling number of customers -- the first hint of the ending season at the "Shoreline Sightseeing". Established in 1939, now the largest touring fleet in the City of Chicago, "Shoreline Sightseeing" became a family for over 300 seasonal crew members who work for the company from March through November. "I know one thing, we all have the same shirts on. You can see us from miles away," says Greeter Tom Manuszak. Dressed in a radiant neon polo -- the "Shoreline" signature uniform, he sticks out from the crowd of suit – clad folks headed for lunch.

On a balmy mid-September afternoon, Manuszak greets people at the Union Station stop. His throaty deep voice echoes two blocks away as a slew of passers-by walks on the Adams Street Bridge.
Manuszak's echo is accompanied by the soft rhymes of Ortiz, a frizz-haired 26-year-old location manager whose tangerine-rimmed sunglasses match the collar of the polo shirt that peeks out of his indigo sweater.
"Boats here, folks, feel the cool lake breeze, I've got b-b-b-boats, kiddies. Travel in style down the Windy City Nile, even see Magnificent Mile. Boats departing from Navy Pier, you can get your tickets right here," Ortiz yells out his rhymes habitually as an interested customer approaches him with a question about the fare.
"You lose your voice," says Kieran Fitzgerald, another member of the deck team who has been a greeter at the "Shoreline Sightseeing" for the last four summers. Fitzgerald says he has made bonds with a lot of his co-workers at the "Shoreline".
"We are friends, we get together after work too," Fitzgerald says. "And especially now, I've been working four years here, so I really got to know a lot of different people."
As early fall days bring fewer customers and slim revenue growth for the "Shoreline," they also carry relief to the employees who sometimes work from six to 12 hours a day in the peak season. "We are a family but we also sell to a lot of families, so once the they [families] are not out of the house anymore, we are never busy at this time of the year," Fitzgerald says. 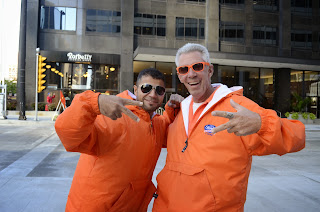 A family business, "Shoreline Sightseeing" is operated by Chip and Matt Collopy, third-generation owners who have successfully brought a fleet from 10 to 19 boats since 2002, making "Shoreline" the largest tour boat company in the city, according to Chicago Grid -- Chicago business magazine. But apart from worrying about making a revenue, "Shoreline" employees pass their professional knowledge to one another and make sure everybody's doing OK.
"Tom is like my grandpa almost and you learn to care for each other," says Dee Scott  who has been shifting between a ticketer and a greeter for the last four seasons. "When we are working on really hot days in summer, I look out for him. I'm a lot younger than him and I take that role on: Are you OK, you need to sit down, [air] conditioning? There is definitely a family feel like having fun and making bonds. That's part of the reason we enjoy this job.
Ortiz says members of the "Shoreline" team sometimes take on a different role when they have to give directions to those who visit the city for the first time. "I'd say one thing that we share in common is our love of the city," he says. "Most people who work here are the people who have lived here all their lives or have some  connection with it. They know directions to places, ideas for places to go to eat or what to do in the afternoon."
In May, 2013 the occupancy rate at Chicago hotels was at 81,2 percent as reported by "Choose Chicago", the official tourism organization responsible for marketing the Chicago area among tourists and investors. The news came after Mayor Rahm Emanuel's Press Office released the information about a record 46.2 million visitors the city saw in 2012.
But what does "Shoreline Sightseeing" a touring fleet that served almost 1 million people in 2012, according to Chicago Grid, do to boost these numbers?
"By operating docks at top tourist locations such as Navy Pier, Michigan Avenue, Museum Campus and Willis Tower, "Shoreline" has become a part of the Chicago experience," says Amy Hartnett, the director of sales and marketing at "Shoreline Sightseeing". "We provide local and visitors with fast, fun, and convenient way to get around while enjoying great views of Chicago from the water."
"Shoreline Sightseeing" offers tours, charters and taxis on Lake Michigan and its main artery -- Michigan River.
Among them are Architecture Cruises, Firework Cruises, Night Architecture Cruises, Skyline Lake Tours, Sunset Cruises and Water Taxis. The prices range from $11 for Skyline Lake Tours that depart every 15 minutes to $49 for Special Event Tours that run only on designated days such as St. Patrick Day.
As the afternoon sun fades away, the harsh sound of the John Deer Marine Engine interrupts the clamor of the crowd gathered on the deck of the Union Station stop. Captain Todd Martin, a man with a youthful face in a blue baseball cap, climbs down the steep stairs of his cabin and greets the incoming horde of passengers who quickly fill the sun-lit boat.
"These strangers that I've seen for the last five years, are probably the most frequently seen strangers that I've ever dealt with," Martin says about his co-workers. "I speak to these people at least once in hour and half the time we don't even know each other's names but there is a bond and respect for the occupation."
While Martin is driving the boat toward the Michigan Avenue stop, manager Darren Morgan is passing out the brochures to people on the Adams Street Bridge.
"I like the fact that everything is run very personal: they [management] care about their people. You do good for “Shoreline” – “Shoreline” will do good for you, " says Morgan who started with the "Shoreline" as a captain and became a manager in 2007.
In the middle of workday, Morgan braces for the incoming crowd that he hopes may bring new boat riders to the "Shoreline".
"The feeling you get at the end of the season is almost like when you go to amusement park and when it's time to go home, people slowly leaving," Morgan says.
After another boat leaves the Union Station stop, a concrete deck becomes cold and impersonal. Ortiz heads back to the Adams Street Bridge where he starts signing his rhymes, trying to get customers for a new boat that will come in 15 minutes.