Snap, crackle and pop; the sound of vinyl lives on in the city 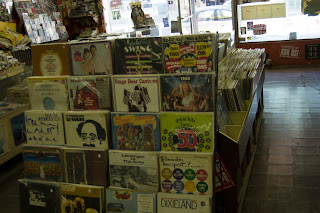 By Brandon Ousley
On a warm Friday afternoon in Bridgeport, Chicago, the boisterous buzzing of electric drills and wails of car horns loom around the community. The clashing chimes of beer mugs and excruciating laughter from a nearby sports bar and restaurant, Schaller’s Pump, are fixated against the lively chatter and blaring guitars that creep into the streets from an open pathway. Enter Let’s Boogie Records & Tapes on 3321 S. Halsted St. Synthesizer plinks and booming rhythms fill the age-old atmosphere, while magazines and artifacts lie across every diameter of the room. Rows of vinyl sprawl around the life-size promotional cut-outs that are placed on top of display cases full of cassettes and 8-track tapes. A phone rings near a paper-filled desk inside.

“Let’s Boogie!” Neil Keller, 64, answers, with a voice that resembles a mixture of Robert De Niro and Ed McMahon. He pulls a pen from a plastic cup with pens, pencils, and ink stamps, and scribble names on a small piece of paper. “Daft Punk’s Random Access Memories, right? Ok, we’ll have that for you for pick-up,” he says.
Keller’s history in Bridgeport, and also as a record storeowner, tell a unique story about America’s long lost—and regained—love for vinyl records. It is symbolized by the fingers of vinyl purists flicking through racks of LPs or 45s, and others who cross the threshold of Chicago record stores that carry wax in an increasingly digital world. This love, for warmth and static, developed resurgence amid an era of codes and bleeps. 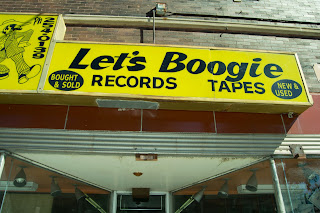 Inside Let’s Boogie, a tall man walks in the open pathway, toward the counter. Richard Ortega is his name. A retired school teacher, Ortega, 58, once was a lover of vinyl records. Before acquiring his associate’s degree at Olive-Harvey College in 1979, he would buy vinyl every weekend. It was more than a hobby, he says. It was his obsession.
“I wonder what would be the value of these, Neil?” he asked, while carefully lying down the dusty cardboard sleeves on the counter.
“Are you trying to trade for cash?” replied Keller.
“Yes, these jokers have just been sitting in the man cave of my home. I have no use for them.”
Keller tilts the sleeve to the left, and slides his fingers in the open album jacket, removing the plastic sleeve, which carries the vinyl record.
It is a thick, black and shiny platter that takes on a life of its own. Its circular, smooth edges are perfectly rounded, as a road with no particular end. In its deep grooves are marks, tics, and scratches that shows its age.  For an average person, it might be considered as a famous relic from the past. For Keller, however, it represents his life.
Keller secured his life-long dream of adding his vision of the musical landscape to Chicago when he was younger. He spent much of his earlier years listening to the jovial and rockling sounds of R&B groups like The Platters and The Moonglows. In the early 1970s, he began to invest money in a new building and, by 1975, he finally acquired it.
“This is how many new titles there are every week,” Keller says. “Can you imagine buying thousands of each title? There used to be five or 10 major distributors over the U.S., and eventually it got difficult for these guys to make a living because they picked up the flag of the CDs and then downloads.”
According to a Vinyl Lives retail report, there are 1,600 independently-owned record stores in the U.S. that still stands in the digitally dominant world today. Between the years 2000 and 2010, more than 4,000 stores (including media chains) closed, according to Nielsen SoundScan retail figures conducted in 2012.
For Keller himself, there are mounts of vinyl records that are pressed and sold to independently-owned record stores and he continues to be optimistic about young and old generations splurging money to own them.

‘Strawberry Fields Forever’
A lady pulls an LP out of the towering stack of vinyl records, hovering over each other so tightly. She walks over to the front of the sprawling space of the store, where an old Unitra turntable sits on a table. Seconds of pops and cracks surface in the store’s loudspeakers, and then BOOM. The towering drum fills kick in and the heavy crackling of guitar runs follow suit.
The record is the Ramones’ 1976 eponymous album, The Ramones. Val Camilletti is her name. Val’s Halla Records is her store.
For 40 years, Val’s Halla Records has sat alongside the suburbia strands of 239 Harrison St., offering every nook and cranny that breathes or lives as music. A melding pot of experiences, recollections and love travels through every bustle, crackle, laugh and smile that permeates the environment. It is the heart of Camilletti’s vision, which began four decades ago.
Camilletti, 73, sits on a small stool, stacking boxes of 45-inch records and record sleeves in a disclosed space, in a brightly-lit office. The walls are covered with old movie advertisements and concert handbills, still appearing in pristine shape. The heavy guitars and bubbly bass floats from the loudspeakers with such grace and precision that it rumbles one’s own body.
“We have so many records, that it’s amazing that we are able to keep track of it all and remember them,” Camilletti said, while on the move, organizing every record in a box by artist and genre. “I always lose count of just how many records come in and out of the store daily. People just respond by their ears and taste.”
Crates of vinyl are stacked to the brim, by genre. A shrine of Elvis Presley memorabilia takes up a quarter of the store’s space, while the commuters and residents alike flick their fingers through each rugged piece of cardboard and paper, unveiling some interesting digs. Surrounding the wall is mounts of CDs, cassettes and—of course more vintage posters and concert handbills.
Camilletti began her musical dynasty listening to classical records as a teenager. In 1962, she started in the music industry, working as an underdog at Capitol Records. In the 1960s, Capitol Records was home of renowned rock bands like The Beatles and The Beach Boys. And Camilletti breathed the same environment as they did, before she left Los Angeles, CA in 1967. She relocated to Oak Park that same year, and ran a four-store chain before it folded in 1972. Then, Val’s Halla Records was born.
“I wasn’t passionate about the record business when I started,” she says. “I was passionate about music. As a little kid, listening to whatever was popular in the day was the norm and I was a fanatic about pop music. I wasn’t extreme about musical tastes.”
Her record store, along with other surviving record stores, has experienced the ebb and flow of the vinyl industry. With every new technological advent emerging and trend changing, owners, like these still stay firm—knowing that the warmth and accuracy from a piece of thick and black plastic rule the digital world.
Email ThisBlogThis!Share to TwitterShare to FacebookShare to Pinterest
Newer Post Older Post Home