On this street corner, a unique sound 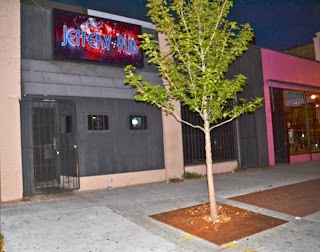 Here on the corner, street hustlers yell, “Loose squares!” Others yell, “Good Reggie,” or “Loud,” advertising a potent brand of marijuana that while illegal is part of the commercial trade here. Call it the hustle. Single cigarettes at 50 cents a pop and two-for five-dollar marijuana bag sales. Middle-aged hustlers dominate the corner, occasionally feuding over their corner turfs for cigarette customers and marijuana buyers. From nearly sunup until way past sundown hustlers stand on the corner or always with an eye out for a potential customer and another one for the Chicago police.

It is part of life on the corner at 71st Street and Jeffery Boulevard, an intersection of two streets creating, in actuality, four city street corners, where the sounds of a neighborhood spill into the air with a decidedly urban flavor, with the sounds of R&B music blasting through the speakers of cars cruising down Jeffery Boulevard. Call it the corner.
An ambulance siren blares on this day. A police squad wails on its rush to an emergency, destination unknown while the hustle, bustle and chatter that rises like loud radio static, even as the shrill of the Bryn Mawr Metric Electric Line train nearby pulls into the South Shore Station from dawn until hours after the streetlights come on—the steel wheels skating over steel track.
At night, the sounds of urban music spill from nearby Jeffery Pub, a popular establishment for gays and lesbians. And there is the sound of feet along this thoroughfare where businesses—legitimate or otherwise—helps give the intersection of 71st and Jeffery its pulse amid the unsightly tapestry of empty potato chip bags, soda cans, cigarette boxes and cans of beer scattered across the corner sidewalk and street pavements.
It is a different beat, unique from other corners in upscale, and perhaps more middle-class neighborhoods in the city. But according Edward Reynolds, general manager of Jeffery Pub, one of the oldest gay club’s on the South Side, South Shore still thrives economically.
“You're sitting in a melting pot area,” Edward Reynolds said. “You have houses here that cost you a million dollars. Your rent can go from $150 on Section 8, to 1,300$ real quick,” he said.

That “melting pot” is made up of the people who live here and the people who work here, perhaps even of the people who die here. And theirs is a beat that is occasionally mixed with the sound of gunshots that ring out and filled with the harmony of laughter, of hardship and struggle and also of hope. And to hear it, one need only listen to the stories and sounds of life that may be found on the corner that lies miles and miles from Chicago’s famed Magnificent Mile. And yet, this intersection holds for many here its own magnificence and also significance to the life and soundtrack in the city.

A corner of History

Some of the worst and best times of the African-American Civil Rights Movement gave birth to the unique rhythm the corner moves to today. Jeffery Boulevard, according to published newspaper accounts, was renamed Milton Davis Boulevard in honor of the Chicago banker and civil rights activist. During the 1960s Davis took part in sit-ins, protesting housing discrimination and he later co-founded what was then known as South Shore Bank.
Seventy-first Street was renamed in honor of Emmett Louis Till, 14, whose death sparked a blaze of outrage amongst African Americans throughout the nation. Till was found in the Tallahatchie River, with a heavy cotton gin fan tied around his neck in 1955, after allegedly whistling at a white woman while visiting relatives in Money, Miss.
According to Chicago History Online, before the Civil Rights era began, the gay community on Chicago’s South Side produced a beat that attracted thousands of gay, lesbian and heterosexuals to a stage of acceptance and tolerance for LGBT people. In 1935, a black gay street hustler and nightclub doorman Alfred Finnie, launched the Finnie's Ball (transvestite/drag ball), which became a celebrated Halloween even drawing thousands of gay, lesbian entertainers and heterosexual onlookers until the 1960s until Jeffery Pub, a gay club located near 71st and Jeffery picked up Finnie's torch.
These days the club’s patrons congregate both inside and outside the club, with a few people dancing to the Hip-Hop, R&B and electronic dance music and groovy beat that even the corner hustlers bob their heads to.
Edward Reynolds, who worked as a doorman and bouncer before he was promoted general manager, says the neighborhood’s residents have gotten used to LGBT club goers overtime.
“I've never been attacked in this neighborhood,” he said as he reminisced about the nights he walked home from the club when he lived in the neighborhood a few years ago. He also said that every blue moon, young kids have said something “stupid” to him. But he takes it in stride.


“Every club has their problems, especially when you're a gay club,” he said. “When you have a boy that looks like a girl and he walks outside and a boy tries to talk to him, until he finds out he's a boy your going to have a problem, unless they already knew,” he said.

A corner of business

Even though violent crime runs through the area, business owners have not fled. And business, they say, is good.
"I see a little hustle, older men in their 50's buying drugs from younger guys." "But to God be the glory, the people still come into this place," owner of Angie's Salon, Angela Smith said. Smith has owned the only salon with a gated private parking lot near the busy corner's intersection for seven years.
She said her salon has been vandalized three times since it opened.
“We also had one encounter three years ago where young guys threw a brick in the window, so we had to replace that,” she said.
Leola Jones, the owner of M&R Prescription Center that has been located on 71st Street for more than 34 years, refuses to allow her fear make her barricaded herself inside her place of business.
“I don't feel, good about walking down there or being in that area. But I always told my self to let it go and do what you have to do because I can't live fearing and not trusting. It ages you,” she said, adding that the South Shore community is still a good community.
“I think it's more of a community over here, a community spirit, and I think people respect it as such. You just get to know them, and in time, everyone becomes friends.”

A corner of life

Brian Johnson, a resident of the South Shore neighborhood, who lives across the street from Jeffery Pub, says the area is a better community to live in than his former South Side neighborhood in Englewood. Johnson said there are more businesses in South Shore and are fewer abandoned buildings and he feels comfortable walking around here.
“You have great churches, shopping malls, resources centers and just great people. And the community is still safe overall, despite the shooting’s,” he said.
And they all form the sound of life here on the corner.
Email ThisBlogThis!Share to TwitterShare to FacebookShare to Pinterest
Newer Post Older Post Home